Enjoying my first cup of coffee on a beautiful Saturday morning. I got to thinking… did Adam and Eve have coffee in the Garden of Eden?

There are two creation accounts in the first book of the Bible, Genesis. Chapter one of Genesis describes the first creation story and isn’t at all about Adam and Eve. Instead, God creates man and woman. He did not give these two creatures a name at this time.  If you read the entire first chapter you’ll also notice that God creates everything else before creating man and woman. 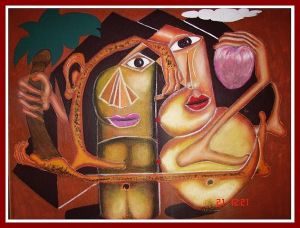 In chapter two of Genesis, God creates man (Adam) first and then decides that it wasn’t good for him to be alone. He then puts Adam into a deep sleep, pulls out one of his ribs, and creates Eve. It was much simpler in chapter one because God had created man and woman at the same time.

To continue with the chapter two story, God told Adam that there are many trees in the garden and has allowed him to eat from any tree except for one – the tree of Knowledge of Good and Evil. I find it odd that God would create a tree that couldn’t be eaten from, but that’s how the story goes. I also thought it odd that God would pre-program Adam and Eve with language and the knowledge to understand language but decided to embed the knowledge of good and evil into a piece of fruit. But, that’s just me!

Along comes the serpent and slithers up to Eve. The serpent tells Eve not to worry about that fruit in the tree of knowledge of good and evil. Go ahead and eat it! Since Eve had no knowledge of good or of evil, she didn’t know that the serpent might be trying to trick her. How could she know that the serpent is good or evil? She doesn’t have the ability to make a value judgement because God chose not to program her that way. Eve tells Adam not to worry about eating that special fruit because the serpent said it was okay to do so. And they both ate from the forbidden tree.

And you know the rest of the story. God punishes both Adam and Eve (oh, and the serpent!) because they didn’t follow God’s command. But think about that! Adam and Eve were behaving the way that God had created and programmed them to behave. Doesn’t an omniscient being know what the outcome is going to be? Yet he punishes them anyway for behaving in a way that they were programmed to behave. I guess you can’t apply logic to this story. It’s another one of those mysterious things that God does.

My knowledge of coffee is good – sometimes evil. Come join me!

One thought on “Forbidden Fruit”