“Beware of false prophets, who come to you in sheep’s clothing but inwardly are ravenous wolves.” Matthew 7:15

It’s coffee time! I wonder if the apostles ever sat around the fire on a cold morning craving their coffee as I do? Just a thought. Here’s a question for you that’s been bugging me for quite some time. What would you do if Jesus gave you the same powers that he gave to his apostles? Would you heal the sick or cast out any demons (Mark 6:7), maybe cleanse those infected with the ebola virus or help a psychotic neighbor – or two? Would you resurrect any deceased people that you know – maybe a family member that died at a young age or your favorite aunt? Would you forgive anyone’s sin (John 20:23)? Most of all, wouldn’t you immediately believe in Jesus? 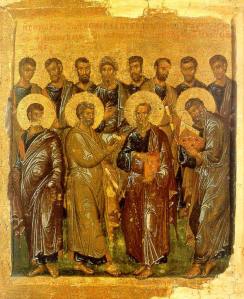 Peter was so good at healing others that people were healed by just being in his shadow (Acts 5:15). But on the other hand he could make someone lose their life without blinking an eye (Acts 5:5). The apostles must have gotten a little arrogant with their powers which caused Paul to sarcastically call them the “super-apostles” (2 Corinthians 11:5).

I once asked a Southern Baptist pastor why I had such a hard time understanding the Bible. He quickly insisted that I was not saved or that my faith wasn’t apparent. “No one can understand the Bible until they have faith,” he exclaimed. Now wouldn’t that have been great if Jesus gave the apostles the power to make the Jews understand that Jesus was truly God? That would have been miraculous!

And with all these powers given to them, some of the apostles still weren’t sure. So, what would it take for you to be a believer? I’m pretty sure that if Jesus gave me super powers, I would be a believer. Up, up and away!  Time for another cup!

One thought on “Super Apostles!”