My wife and I got into a discussion about unicorns last night.  I said that unicorns are real because the Bible says they are.  She didn’t believe me so I told her that I would prove it to her.  But first, my coffee is waiting.

Now, I don’t believe in Bigfoot or the Abominable Snowman or anything like that.  But unicorns are mentioned in the Bible nine times.  And if one believes in the Bible, why would one not believe in unicorns?

Okay, maybe they just made a mistake when they interpreted the ancient Hebrew into English.  But, interpreters today realize that unicorns are mythological animals and all the modern day Bibles have changed the word to wild ox or something like that.  Well, maybe not all of the Bibles.  The King James Version still believes in unicorns!  Oh, and dragons, too!

Well, time for a second cup! 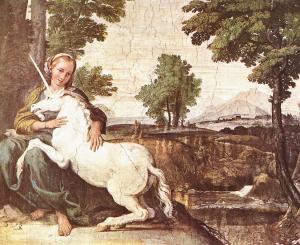 As promised to my dear wife – here’s my proof (King James Version):

Numbers 23:22 God brought them out of Egypt; he hath as it were the strength of an unicorn.

Numbers 24:8 God brought him forth out of Egypt; he hath as it were the strength of an unicorn: he shall eat up the nations his enemies, and shall break their bones, and pierce them through with his arrows.

Job 39:9 Will the unicorn be willing to serve thee, or abide by thy crib?

Job 39:10 Canst thou bind the unicorn with his band in the furrow? or will he harrow the valleys after thee?

Psalm 22:21 Save me from the lion’s mouth: for thou hast heard me from the horns of the unicorns.

Psalm 29:6 He maketh them also to skip like a calf; Lebanon and Sirion like a young unicorn.

Psalm 92:10 But my horn shalt thou exalt like the horn of an unicorn: I shall be anointed with fresh oil.

Isaiah 34:7 And the unicorns shall come down with them, and the bullocks with the bulls; and their land shall be soaked with blood, and their dust made fat with fatness.

4 thoughts on “Unicorns Are Real”